Cavemen didn’t exactly feast on doughnuts, marble cake, and chocolate truffles, but that doesn’t mean you shouldn’t be able to on the paleo diet.  These are some of the best paleo dessert recipes that I have scoured the web to find for you all.  To be honest, I haven’t made most of them, but the pictures just look so good that I had to share a lot of them.

The recipes below are paleo-friendly since they substitute some of the bad ingredients like sugar and flour with paleo-friendly alternatives like maple syrup, honey, and almond flour.  Let me know which of these you like best.  The list will forever be growing as I come across better paleo desserts as well.

In the beginning of every year, we are all usualy victim to Girl Scout Cookie season.  This is the time of year that all of your family and coworkers related to a girl scout will start to pester you to buy a box (or 30) of cookies from their little scouts.  You can now get out of this since they don’t make paleo girl scout cookies…yet  Instead, head on over to Elana’s Pantry for a great recipe for homemade paleo Samoa Girl Scout Cookies.

I found this incredible recipe when I was just looking around to see if there were any paleo versions of marshmallows.  I wasn’t going to make anything, but I was just curious if there was a way to make it.  Now that I’ve seen this chocolate treat, I’ll be putting the marshmallow recipe to work!  This is basically a Fluffernutter and Reese’s Peanut Butter Cup combined into one delicious little treat. 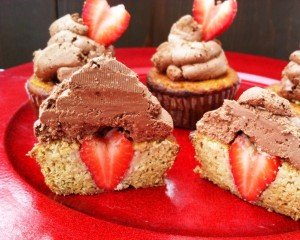 3. Vanilla Cupcakes with a Strawberry Surprise

These are a little too fancy for me personally, but I do love strawberries so I figured this is definitely worth the share.  I have heard some people saying that they aren’t a fan of Paleo desserts or Paleo cupcakes because they aren’t sweet enough, so I figure baking a sweet strawberry into the mix could definitely fix that up quick.  The icing even looks pretty easy to make with just 5 simple ingredients (full fat coconut milk, dark chocolate chips, coconut oil, vanilla extract, and a pinch of salt). 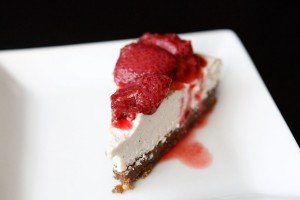 Did he?  Oh yeah!  I said cheesecake!  Another magical gift from a primal inspired baker who refused to say it couldn’t be done.  The cheesecake base of this filling dessert comes mainly from raw cashews, pecans, and Medjool dates.  That is mixed with paleo sweeteners like vanilla bean, maple syrup, and coconut oil to make for a great dairy-free alternative to one of my favorite desserts. 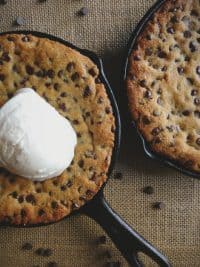 Just before getting onto the paleo diet, I tried my first pizookie (deep dish cookie).  This was during the holidays back home on Long Island, and I ate almost the whole thing.  That was a turning point for what actually got me focused on needing to do the paleo diet.  This version of the pizookie, however, doesn’t have all of the sugar and gluten/flour of the regular kind.  You substitute the flour with almond flour and the sugar with honey.  You’ll end up with a giant sugar-free, dairy-free, gluten-free cookie that is also full of flavor. 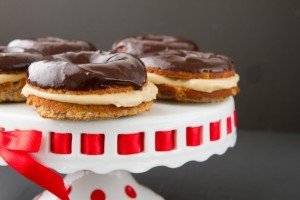 Doughnuts are supposed to be soft, fluffy and moist.  Usually the paleo recipes tend to dry them out.  I don’t like most paleo donut recipes, but this one is a little different.  The chocolate glaze and the creamy Boston cream filling make you forget that you are eating a doughnut made primarily from almond and coconut flour. 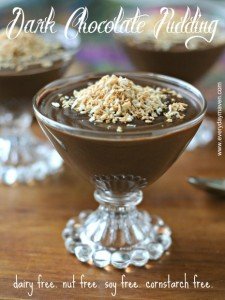 This one makes a great little treat that you can also take on the go with you.  Fill a small mason jar or Tupperware container and you can bring this to work in your lunch bag.  I have yet to make this amazing looking dessert since I still cannot find arrowroot starch!  That isn’t going to stop me from staring at the picture a little longer though. 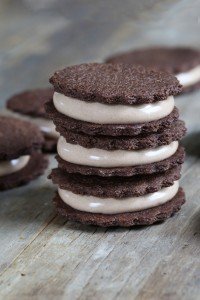 Here is another great “copycat” recipe that I was able to find for you.  This recipe takes a little more prep than most of the others that I have listed here, but if you are seriously craving an Oreo cookie, this should do the trick.

The cream isn’t going to have that same consistency you’re accustomed to with Oreo’s, but it tastes just as good, if not better.  You might have a problem trying not to spoon feed yourself the frosting while cooking this.  The frosting is made up of unflavored gelatin granules, egg whites, coconut sugar, and unsweetened cocoa powder. 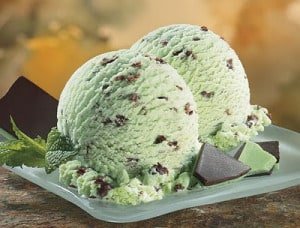 Well, If I knew that it was this easy to make homemade ice cream, I would have been doing it long before I ever started this diet.  There are only four ingredients that you need to make your ice cream base.  Once you have that ready, you can add different ingredients to get new flavors like pralines and cream, mint chocolate chip, double chocolate, and maple walnut.  Don’t worry, the flavors are all available if you click on the picture for the ice cream recipes. 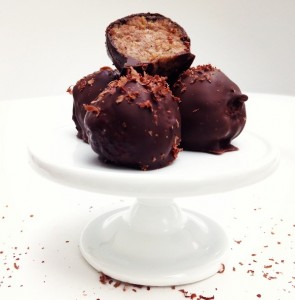 Whether you are paleo or not, making homemade truffles will impress pretty much anyone.  And the secret to these is, they aren’t really that difficult to make.  I have found tons of different versions of paleo truffle recipes, but my favorite is hands down these paleo banana bread chocolate truffles.

If you want some more options, just hop on Pinterest and search paleo truffles.  There are surprisingly a lot of different recipes available for primal truffle recipes.  If you’re looking to increase your fat intake, some of these are straight-up fat bombs, but not all of them. 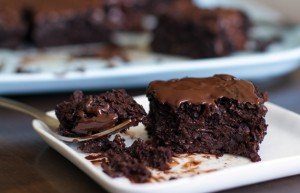 I have been finding a ton of different brownie recipes with a lot of different bases.  Most include almond flour, like every other paleo dessert recipe.  There are a few other things that I have seen people trying to thicken up the brownies like zucchini, avocado, and sweet potato.  The only recipe that I have attempted is the sweet potato brownie recipe, and it came out pretty good. 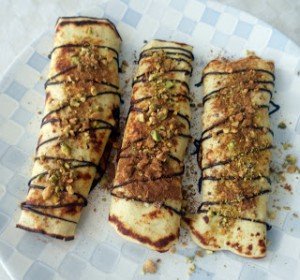 Well, crepes can also technically be considered a paleo breakfast recipe, but it really depends on the time of the day that you’re making these…I guess.  Really, all that you need to know is how to make the crepe/tortilla, then you can figure out what to add from there.

I add strawberries with my own homemade “Nutella”, a recipe that I hope to share soon.  If you don’t see it, please harass me in the comments!

You can also make these the “savory” way and make it a lunch. 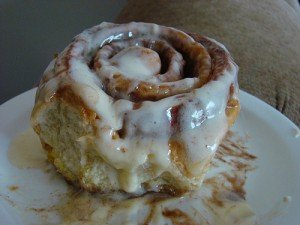 I have heart too many comedians ripping on Cinnabons to be able to actually enjoy one at the mall for years.  I do remember making a version of them back in 7th grade when we had home economics class, which I ended up making at home every week.  These paleo friendly cinnamon rolls are just as easy as the ones that I made as a 12 year old and even better.  If you want to make them a little sweeter, just add a little more maple syrup, or a bit of honey. 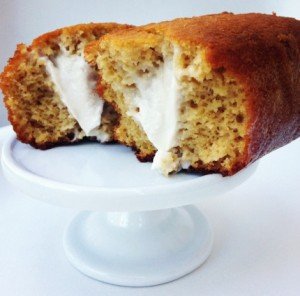 I don’t eat Twinkies.  I don’t like Twinkies. But, I think it is awesome that somebody took the time to figure out how to make a paleo-friendly Twinkie recipe.

For those of you that are at all interested, give this a shot.  Let me know how they turn out since I can’t really be a good judge of these.  Maybe I’ll make these just for fun one day.

The pictures do seem enticing though! 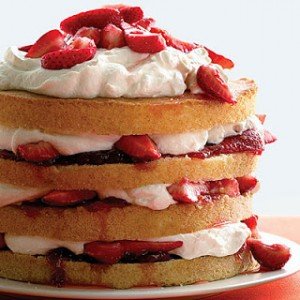 By the way, April 17th for all of you that want to mail me some gifts 😉 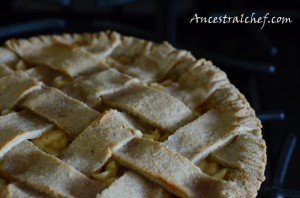 This staple to the dessert menu does exist in the primal world.  Basically, we just needed to get the flour out of the pastry and the sugar out of the filling.  The usual substitutes came in (almond flour, chia flour, and raw honey) to make this pie a paleo friendly pie.  The dough is a little bit more difficult to work with than it would be if you were making a regular pie, but take your time and this should come out pretty amazing.  It really is hard to mess up apples baked with cinnamon. 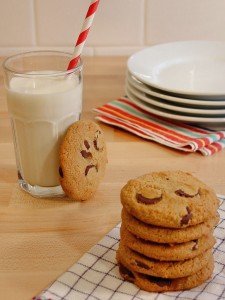 Did I seriously get this far down this paleo dessert recipe list without mentioning the world’s most popular dessert?  Well, I added it at least.  There are so many different variations of this paleo chocolate chip cookie recipe just like there are thousands of variations for regular chocolate chip cookies.  The best one that I have tried so far comes from none other than WickedGoodKitchen.com.  You can eat these with serving coconut milk, which I do.  Just don’t dunk the cookies in the coconut milk and expect it to taste quite like the real cookies and milk.

This site uses Akismet to reduce spam. Learn how your comment data is processed.

What keeps this site free…

This website uses cookies to improve your experience while you navigate through the website. Out of these cookies, the cookies that are categorized as necessary are stored on your browser as they are essential for the working of basic functionalities of the website. We also use third-party cookies that help us analyze and understand how you use this website. These cookies will be stored in your browser only with your consent. You also have the option to opt-out of these cookies. But opting out of some of these cookies may have an effect on your browsing experience.
Necessary Always Enabled
Necessary cookies are absolutely essential for the website to function properly. This category only includes cookies that ensures basic functionalities and security features of the website. These cookies do not store any personal information.
Non-necessary
Any cookies that may not be particularly necessary for the website to function and is used specifically to collect user personal data via analytics, ads, other embedded contents are termed as non-necessary cookies. It is mandatory to procure user consent prior to running these cookies on your website.
SAVE & ACCEPT